﻿Check out out redesigned Trove Furniture Annex
and our new furniture line from Christopher Gaona, Inc.

A comfortable place to be + Super Savings!

Features a lovely coverlet, 2 shams, and it comes in a bag which can be used as a matching bolster. This product was recently featured on Eye on The Bay and the mark-down is very low. If interested come by soon because they are going fast!
(Just one of the many styles shown below: Mimi in 'lacquer' red) 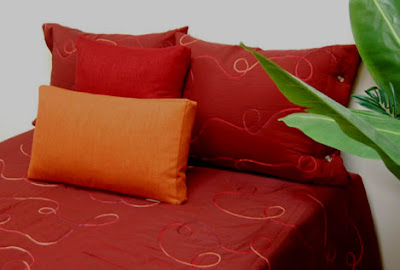 Bedding was originally sold for $129
Trove's Price is only $39
Extra Details "Bed-in-a-Bag"
Posted by Trove at 1:54 PM No comments:

Happy New Year Trover's!
We hope you caught our special feature on Eye on The Bay; we are proud to say its the second time we have been on the show and we are honored. If you didn't get to see the show we should have the link up on our website shortly. All of us at Gilman Shopping Village wish you a very happy 2011, and we look forward in seeing you soon!

trove - treasure for your home